Bay leaves, from the plant known in Latin as Laurus Nobilis, are derived from a plant that is quite favored as a shrub for hedges and topiary sculpture. They are also widely known throughout the world as a flavoring agent for a wide variety of culinary crafts, where they are frequently used to wrap other spices and then removed from the dish in which they are used; the leaves are sharp and unpleasant to eat when left in a dish. They are also famous in myth and legend as the laurels worn by the glorious victors of Roman and Greek myth and legend. Some also hold that within magical traditions they are quite useful in spells of wisdom, clairvoyance, protection and healing.   Herbalists and the crafters of oils most frequently use bay leaves to help create essential oils that have somewhat of a spicy aroma. They're also occasionally used to help keep linens fresh, adding their aroma and preventing insect infestation. Some also believe that they are useful in treating headaches, inflammation, infections, and digestive issues.   This is a 1 oz packet of whole bay leaves.
Posted by Raven's Mist at 1:20 PM No comments: 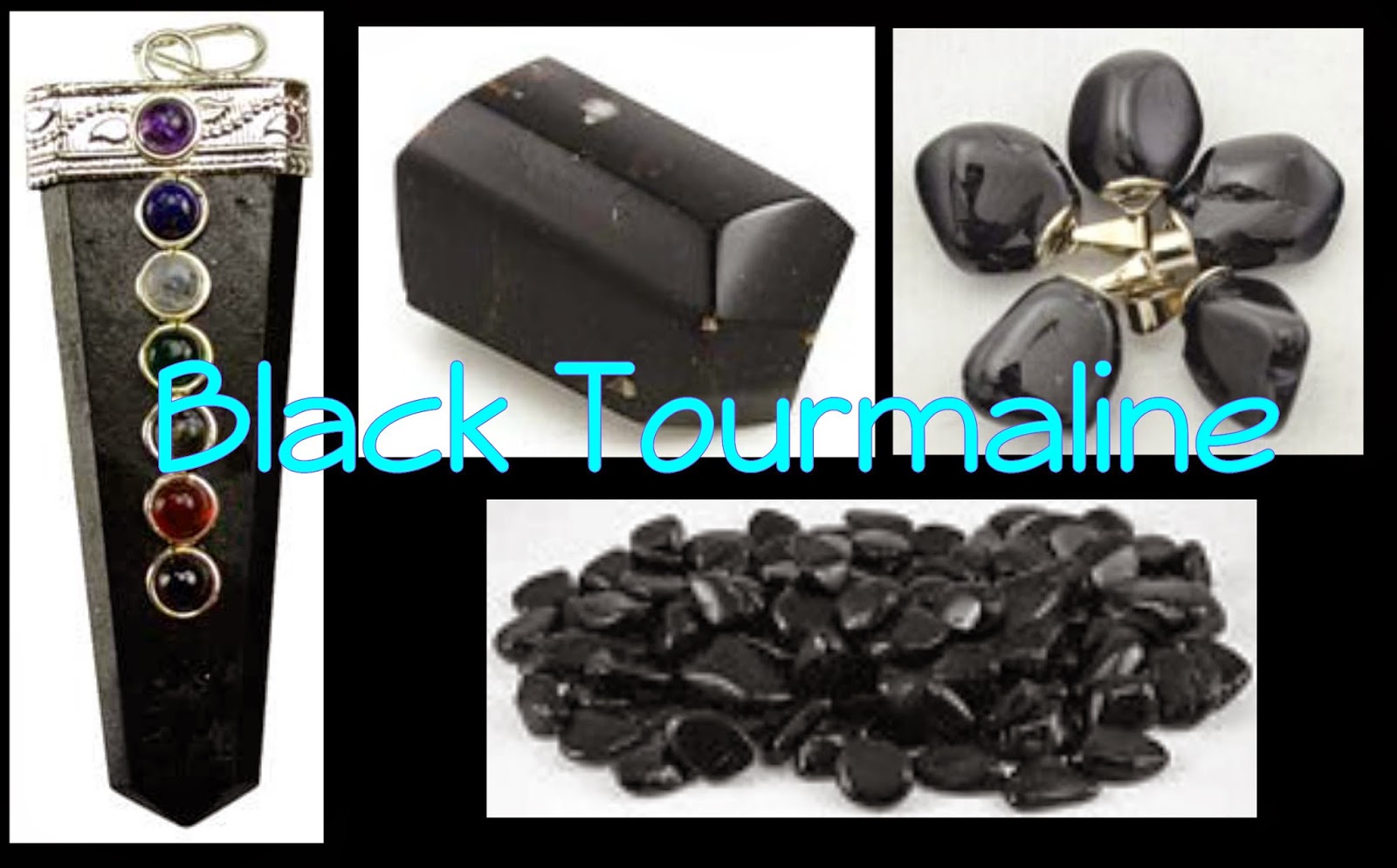 Healing Use:  stimulates the reflex points associated with the lower back, legs, ankles and feet, and may be used to realign the spinal column. It provides pain relief and assists with strained or torn muscles, numbness, arthritis, and scar tissue.
Black Tourmaline was used in ancient times for protection against earth demons.  Today, it is used for psychic protection, when used as a Talisman.  It can be compared to a lightning rod in the way in which it absorbs energy.  Also, rubbing a Tourmaline Talisman is said to bring good luck.  As it is a root chakra stone, it is also great for grounding energy.
Posted by Raven's Mist at 3:26 PM No comments: 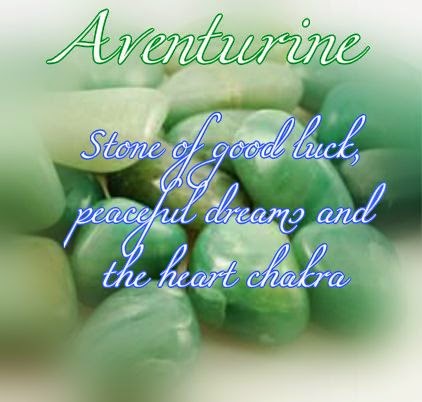 Widely viewed as an all around luck stone, Aventurine is more specifically known for stimulating dreaming and helping those who use it find balance and a stronger personal identity. Green Aventurine is particularly revered as a stone that can ease anxiety and calm emotion, perhaps helping to whether stress and worries, helping you to keep a positive outlook.
Posted by Raven's Mist at 6:26 AM No comments:

One of my favorite things to create and use I like to start it on the new moon . We use it cleansing by adding a bit  a bucket of water that we use to clean with and also in adding to healing spells.

Four Thieves Vinegar
Four Thieves Vinegar is an ingredient found in many hoodoo and folk magic spells. The recipe seems to have evolved from Western Europe, around the fifteenth century, and there are many variations on how to make it. The common thread between all the legends is that there was a horrible plague in a village, and the only people who survived were four thieves. Each of them contributed one ingredient to a jar of vinegar and garlic, they drank it, and somehow survived the plague unscathed.

Uses
Banishing: Use this spell to keep someone bothersome away from you. Write your target’s name on a piece of paper – some traditions recommend you use brown paper, or parchment. Soak the paper in Four Thieves Vinegar. Fold the piece of paper up as small as you can, and bury in the dirt somewhere.
Protection: Use Four Thieves Vinegar to prevent magical attack, as well as to protect your property. Sprinkle it liberally around the perimeter of your property, and keep intruders away.
Ending a Relationship: In some Hoodoo traditions, there are a variety of spells that use Four Thieves Vinegar to break up a couple, or to cause strife in a relationship.
Healing: This is a great ingredient to use in a healing ritual - after all, look at the history behind it! Use it to anoint a poppet of a sick person, or dab it on the walls and floor of the room where the ill individual lies.


How to Make Four Thieves Vinegar

First, find the best vinegar you can get. Apple cider vinegar is good, red wine vinegar is popular too. Peel and mince four garlic cloves and add them to the vinegar, in a jar with a lid.
Traditionally, each thief contributed a single ingredient – choose any four of the following: black or red pepper, cayenne or chili pepper, lavender, rue, rosemary, mint, sage, wormwood, thyme, or coriander. Add these to the jar.
Allow the mixture to sit for four full days – some people recommend placing it in the sun, others in a dark cabinet. Either way, be sure to shake it once a day. After the fourth day, use it in spellwork. 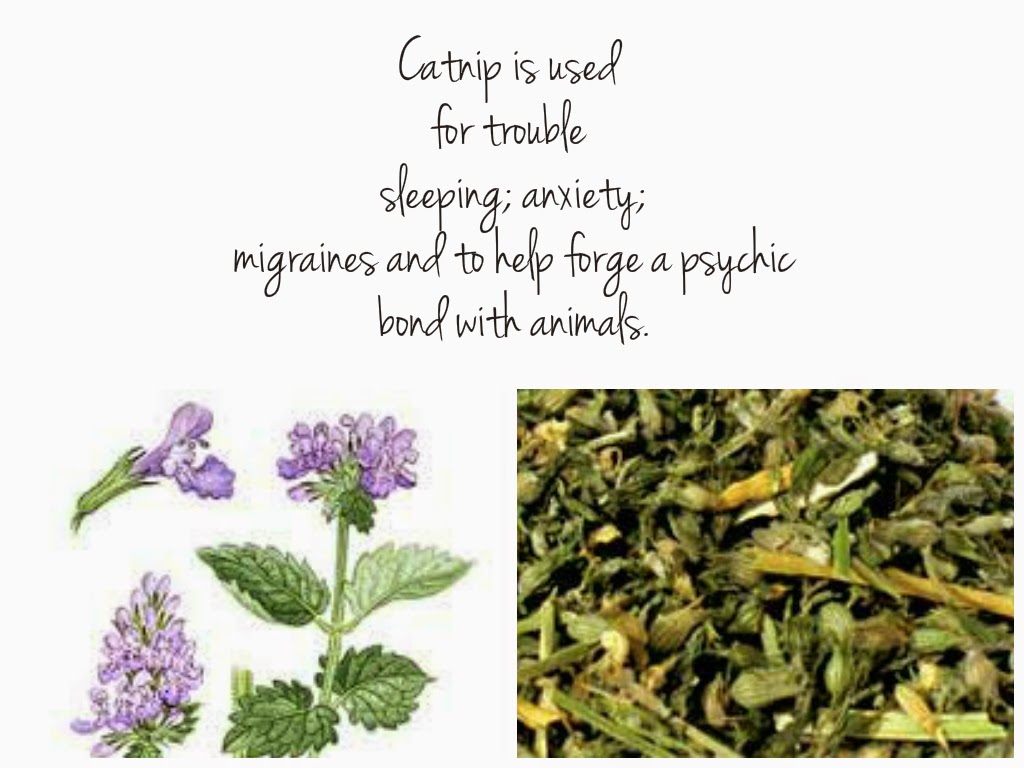 Steep catnip in hot ( not quite boiling ) water for about 6 minutes and honey for sweetness if needed. Cats LOVE this tea, just no honey for them.


Also known as Catmint and its Latin name of Nepeta Cataria, Catnip is actually the broad name for over 250 flowering species of plants that belong to the genus of Nepeta. Originally from Mediterranean regions, Catnip has since become common throughout North America, and is famous for the effects it has on cats. In two thirds of all cats, catnip induces a state of euphoria, often resulting in them acting rather off the wall and crazy, frequently in manners that are entirely impossible to predict. The remaining third of cats are actually completely immune to this effect, and have no observed reaction to the herb. Interestingly, some people also experience a much milder version of this euphoria, and it is sometimes employed in spiritual and magickal purposes to help find this state of mind or help forge a psychic bond with animals. Today, it is most commonly found in cat toys around the world, but catnip tea has also been found to be quite beneficial in treating colds, fevers, and other infections. Some studies also suggest that it is soothing for upset stomachs and may possibly be helpful in preventing morning sickness in pregnant women. Catnip has also been shown to be employed successfully in a mosquito repellant when applied to the skin in a variety of lotions and ointments. This is a 1 lb bag of cut catnip.

Promote Your Page Too